Do you remember months ago I used to post about Express Bloggers that I was working on? I finally launched it although could not begin a campaign for its publicity. I got a few bloggers around the country. But the site is not so active yet.

Yesterday, I had the first media coverage of Express Bloggers. Fortunately, it’s The Daily Star, country’s most popular English newspaper. It was printed in its Sunday Magazine called “Star Campus”.

Click here to read the article on the online edition of Star Campus.

I believe it’s the new beginning. Since most Bangladeshis are not comfortable with English, they don’t blog in English. You will find plenty of Bangla blogs hosted in self-hosting, blogspot, wordpress.com and the community blogs around. There are lots of English blogs as well. But as far as I know, there is no active English blogging community in Bangladesh. In our terms, we say, a community blogging platform is a single blog where hundreds or thousands of bloggers write posts on different topics. These blogs engage people more because they don’t have to do anything to bring traffic as the site is already busy with lots of people on board. So, as soon as you post a new topic, you start getting comments. It’s very awesome for interaction with like-minded bloggers and for newbies it’s faster to get known.

Making an English blog popular in Bangladesh is one of the toughest challenge. But I’m determined and have already taken the challenge. I believe, I can do this. I also believe, a belief can make miracles. I’m not waiting for that miracle to happen, though. I’m working hard to do a miracle.

One day, we will be the strongest community of English bloggers in Bangladesh and the world will hear us and get to know about us from our blog. 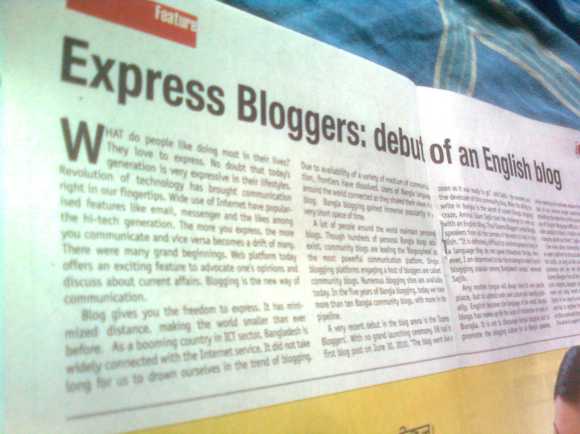 When this morning I called my mother to my room to show that the site I made was featured on the daily newspaper, she was like, “Oh, okay.” 😐 The excitement didn’t seem to reflect on her. Because I have been working on newspapers (not the English ones), getting my writings published is not a new thing. But this time it was not me writing that stuff. It was one of my projects that I started working on earlier this year and have a big dream with it. But when I hadn’t found her happy, my excitement faded out.

The same thing occurred when about three weeks ago my writing was published on the English newspaper for the first time ever. While for me it was of great excitement, she seemed like nothing really happened. Excitement faded.

But yesterday was one of the biggest days of my life because getting my work published in a newspaper like The Daily Star is no small deal! I know the site has potential. I know it will grow insanely larger only if I can let maximum number of people know about us. And it was the first step to success that we got some media attention.

But my mother, she withdrew my excitement. I haven’t yet even told my father about it. Because I know he won’t be very excited with it either.

I sadly wish I had some family support. If I didn’t earn some money by working online (that’s the part-time job I do on a news agency), I would have been banned to use computer long ago. Thank God I at least earn some money to bear my internet cost and pocket-money. I don’t have family support that much. No encouragement. Nothing. Sometimes I feel like giving up every damn thing and just step back.

I hope, my courage and wish to do great things don’t fade out totally because of this.

How to avoid burning out when working from home

How to fix “Error: admin_policy_enforced” on G Suite